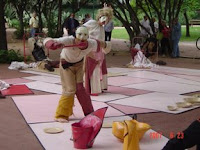 After the first day of encounters, I stayed at the hotel and hung out with Josh during his breaks for a couple of days. It was relaxing... no house works. One time during his lunch break, we jumped on a cable car and let it took us wherever it went (typical us... no specific destinations.) We came across a street performance (actually it was in the park.) It was very interesting and attracted many children and adults. The show was good but we couldn't stay long. 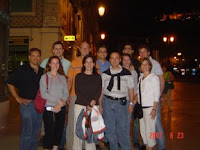 At night, we explored different restaurants with his colleagues. A very fun group of people. This picture was taken after the 'chicken' restaurant. According to Rick Steves, the chicken dish is the best in town. We all ordered the famous 'chicken'. However, Josh and I seemed to have different opinions. After all, we are not fans of chicken. 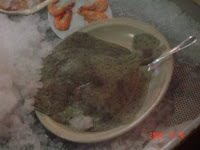 Here is another picture of a fish taken at a restaurant in the Doca area under a bridge looked just like the Golden Gate. The waiter was trying so hard to sell us the fish. He brought it up three times and we kept saying NO. He was very disappointed. We thought he must want to get ride of 'the month end inventory' since he did the same to other customers as well. If you thought the fish I cooked looked gross, you should have seen this one. I didn't think it would have been fresh or testy. Especially who knew how long it had been there!!

Josh and his buddy Tom. We had a great time of making fun of the fish and what it appeared to be 2 cups of too much butter on our dishes instead of just seafood!! 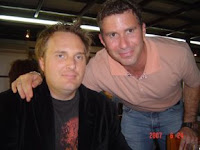 June 27 Wednesday night, everyone had a break from work and had a little fun. We hiked up to Castelo de Sao Jorge where had the finest view in Lisbon. We walked along the reconstructed ramparts and waited for the shopping group to reconvene. 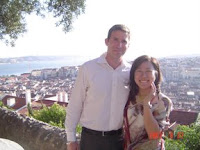 Some couldn't help stopping at shops on the way up. I was not one of them...Surprise! In the castle, there is a restaurant where served great food. All I remember was... good food, plenty to drink, and lots laugh. After dinner, we experienced the 'Portugal style of night life'. Here was what we were told - people don't start bar hopping until 2 a.m. and clubbing until 5 a.m. Can you believe that? We could only manage to experience the early part of night life. I was amazed how crowded the bars, streets along the bars, and clubs were. And it was only Wednesday. Can you image what weekend is like? We all wondered how they could function at work the next day.
Posted by ally at 2:07 PM