Exciting... the first trip out of Germany together. However, Josh and I took different flights. Josh's flight was at 8:30 a.m. and had a 10 hour lay over in Frankfurt and I had a 3 hour direct flight at 10:55 a.m. (Since he is considered a US employee, his ticket was purchased through the US side. Josh got my ticket through one of European airlines Germanwings. What a good husband!)

Fist encounter --
I landed around noon Lisbon time, got my baggage, and waited for a taxi. I saw a man behind me holding a piece of paper appeared to be the same hotel as Josh and I would be staying. I asked him if he would like to share a taxi with me since I was going there too. So we did and on the way we chatted about the reason of visiting Lisbon. I told him that I was coming with my husband, but he had to take a different flight and layover in Frankfurt for 10 hours. He immediately said "Joshua!" "Yes!", I said and thought...lucky me to ran into someone Josh knew. Joyachim (His name I learned in the taxi ride. It is pronounced like "Yoahim") checked in the hotel and I checked my baggage at the desk, then we went out wondering around the city together.

Second encounter --
Joyachim and I took a subway to downtown and changed to a bus to Belem. There were not that many people got on or were on the bus. However, just we were trying to figure out how to purchase bus tickets (there are two ticket vending machines on each bus and they only take coins.) we suddenly got a lot of pushes around us. I felt like everyone suddenly was in line and buying tickets at the same time while we were figuring the system out. Then, I saw a ugly hang hiding underneath a coat was approaching my wallet. I followed the hand, looked up with a unbelievable stare, and started thinking out loud in English... this is crazy... how can they be so brave... stealing people's money on a day light! Blah blah blah... I was going nuts... until I saw Joyachim holding his wallet like holding a life preserver. I realized that I was blabbering. I calmed down finally and was glad that Yoyachim was with me. Later, I took money out of my wallet and put them in my frond pocket and checked if they were still in my pocket every 5 minutes.

The rest of day went well. Yoyachim and I wondered around in Belem. We saw the Monument to the Discoveries, Torre de Belem, and Mosteiro dos Jeronimos but didn't get inside. I thought I could do that another day when Josh is working. Then, we took a bus back to downtown and wondered around Baixa area. There are a lot of shoes stores...I was like...YA! I am in heaven! I love shoes shopping. Joyachim was like...Josh should keep your credit card for you. A smart guy!! (Apparently I was thinking out loud again.) We also ran into a gay parade. It was interesting. (Later that night back in the hotel room, I saw they even had a live concert in the center of downtown that continued from the gay parade earlier.) Joyahim and I ended our day with a local traditional meal. I had Fresh Seafood Rice...Yummy.

Josh arrived at the hotel around 10 p.m. and told me that he had an interesting day too. He ran into people who were coming to the HP conference and had a great time with them too.

What an interesting day for both of us! I wondered what the rest of the trip will be!!
Posted by ally at 5:21 PM No comments:

After been married for so long, we finally went shopping for our wedding rings. We actually went back and forth many times before we finally made our purchase. First, it was on a Sunday...Nothing opens on Sunday! Then, the store was closing. (Most of stores close at 7 p.m. Don't they know there are people who are 24-7 shoppers!!) And, we went on a Saturday...tried on many sets and couldn't make up our mind.... white gold or yellow gold...diamonds or no diamonds. So, we left and went looking around other stores.

Decisions and decisions--
A couple weeks later, we finally came to a conclusion--white gold and square instead of round. The woman's has small diamonds all around it and the man's has a skinny line carved around it. It is simple and different.

Fitting --
One of the girls (staff) started fitting our finger sizes. Josh's was easy...didn't need to be resized. The girl then asked me tired on size 51, 50, 49, 48...too small so she said, size 49 is good and asked me how I feel. I said, "It feels fine (lift up my finger at the same time) but how come my finger is turning purple?" The staff was in shock and asked anther girl to help with size and translations, at the same time, taking the size 49 off my finger. "The SIZE does MATTER!!" Then they asked when is our wedding day so they can make the rings in time for the day. We looked at each other and them, and said "we are already married." Two of them were like...wow, what an interesting weird couple! Shopping for wedding rings after married!!

I learned later on that German required to have wedding rings on the wedding day.
Posted by ally at 1:52 PM 2 comments: 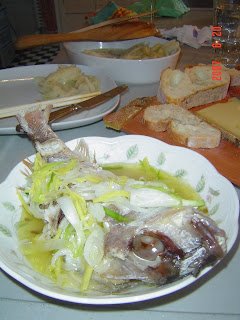 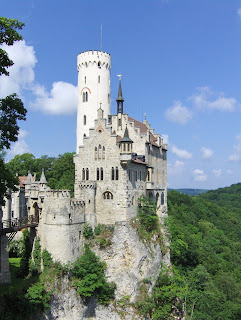 Fairytale castle which was built as such...
Posted by Your Host at 9:39 PM No comments: 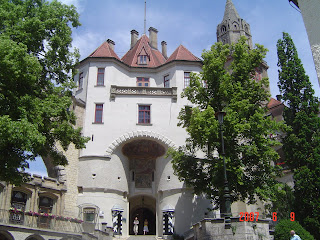 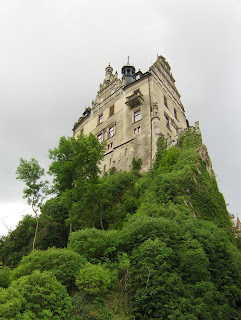 Sigmaringen has a very cool Residenz Schloss (castle) which was the famous Hohenzollern families residence. We took a guided tour inside...sorry no photo's inside... 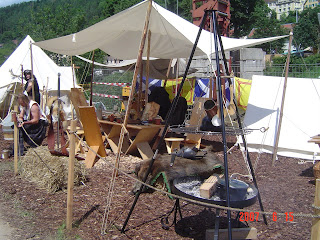 Josh said (heard from his coworkers) that the Horb Medieval Festival is one of the better ones. The best one is at the Minchin and it only happens once every four years....like Olympic (Interesting! Don't you think?) Medieval Festival is a little bit different from other festivals because they have shows (not live music shows). The Minchin show would cast actors and actresses from the locals. The ones get the act will start growing their hair and beard, so they can truly reflect the people in Medieval time (How serious!) Well, the last time was in 2005 and who knows where Josh and I will be in 2009 for the Minchin Medieval. So...Josh bought the show tickets for the Horb Medieval Festival.

We got up early and took a train toward southwest of Stuttgart last Saturday. Just when we got on the train, we saw people in Medieval costume. Immediately, we thought...this got to be serious that people actually dressed up for this, and we could just followed them when we arrived. 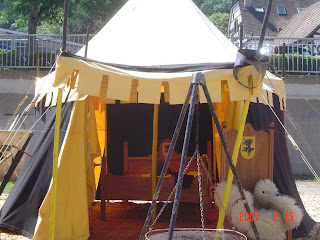 The first thing I saw was MORE people in costume and food that was cooking on the fire pit out side of Medieval tents. There were so many tents. (Danielle, this reminded me so much of Grisward Family Reunion. Friends camping by the river, cooking, painting at each other's face, helping each other's hair, or just handing out. I bet the Grisward would love it.) Then, we went to the market area. As you can image like every other festivals, food and beer were every where. However, there were differences. Food were big chunks of meat on a skewer with bread, a big chicken leg with a big slice of watermelon, or a big plate of stew meat. Beers had different style of cup and there was this melon drinks that was really good...however, I didn't taste any alcohol in it... so I moved on to the beer. The bread was made fresh and cooked in the Medieval style of oven. Everything just smelled so good. I had to admit that I ate so much and almost gained back all the pounds I lost in last few weeks) 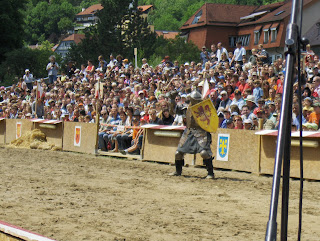 Show time! (and more beer of course!!) The show area was packed with people and lots of kids. Thanks to Josh for getting the tickets early... we had the frond row seats. The show was in German only so... I could only guess what the story was... there were good guys and bad guys. The bad guys took away a woman's baby and burned houses (real fire by the way) Then, there were sword fights, arrows shooting, horse riding tricks, axe flying, tournaments, and more fire (German likes fire a lot. Weird!!) The good guys killed the bad guys at end and the baby reunited with the woman. It was fascinating that everything was so real and so Medieval not just watching it in the movie theater. It was a great festival. 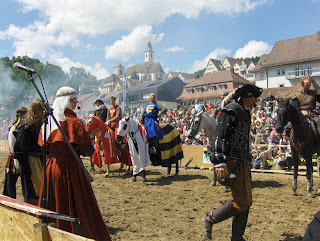 This is how Josh describe the even... (a man with few words)

Well I guess you have to go somewhere that existed in medieval times to have a real medieval festival!!! This was really great...

I just wonder what these people do when the festival is off? 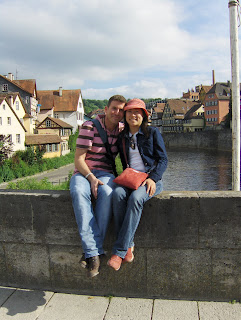 Another parting shot from us.

We are still a little unsure what the point of the festival was, but it was great.
Posted by Your Host at 8:59 PM 3 comments: 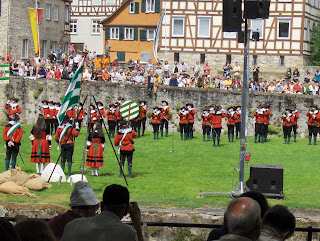 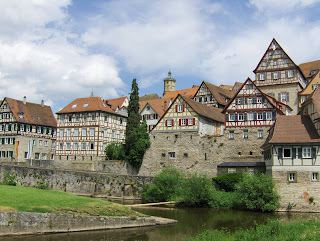 This is an old set from May. Ally and I went to Schwabish Hall to see a festival...something about cake, salt and (beer and music mostly). It was great...
Here is the town...
And here is the historical play ...

Welcome to our blog. We are new at this so be patient as we make additions/ changes and updates. We hope this will be a way for us to stay in touch with our friends and family in all the corners of the globe.
Posted by Your Host at 7:13 PM 13 comments: