We had such a lay back day in Madrid. We (actually just me) took a long time to get ready in the morning when Josh went out and came back with a coffee. We walked around a little bit, snapped some pictures, had lunch at the Plaza Mayor, visited the Palacio Real, had beers at some smoky tapas bars, and then quickly browsed through the arts in Museo del Prado. 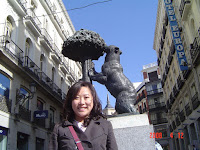 It was before noon when we sat down in one of the outdoor restaurants in Plaza Mayor. Slowly, we saw young people gathering in the Plaza Mayor meeting with friends, families taking a stroll, street performers starting their acts, and people like us eating and people watching. It was a very interesting square for people watching. 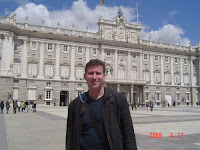 We loved the palace (Palacio Real) interior decoration. Each room was so magnificent and dramatically differed from the next. Too bad that we couldn't take pictures inside. Although it is not as big as Chateaux de Varsailles, it is more beau so much because of the detailedtiful than Varsailles in some ways. We were like 'wow... wu... oh my god' very impressed. This picture was taken from out side.

Later we went to Museo del Prado around 4pm and found out it's free after 6pm. It was an easy decision - save the ticket money for beers...especially the arts would appear even more incredible and enjoyable after a few beers. And we wouldn't feel bad if we couldn't understand the art or see them all since it's free. 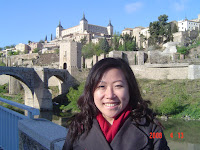 Every corner in Toledo was built before the 18 century when the capital moved to Madrid. The whole city sits on top of a hill like an old castle. It was very beautiful to walk around. We saw many old things as usual and a lot of El Greco paintings in the Catedral and Iglesia de Santo Tome.
Posted by ally at 8:55 PM 1 comment:

Besides meeting the relatives and friends, I finally had courage to drive again in Taipei city with Josh screaming next to me in the passenger seat. Although I had driven in Taipei almost 10 years ago, I never drove as far as the places I took Josh. Thanks to my friend's GPS I didn't get too lost and we made it safely. 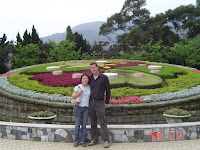 Here we were in front of the Flower Clock in Yangmingshan National Park by the entrance. It was also the Cherry blossom season. 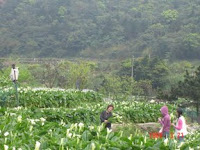 Jhuzihhu, the Calla Lily farm, is my favorite part of the Yangming mountain area. I insisted to drive there just to show Josh how pretty the place is. I didn't realized that I wouldn't be able to find any parking although it was Friday. We ended up having lunch there just so we didn't have to keep on driving. It seemed that Josh needed a break from my driving. (When you are not used to driving or sitting in a car with so many people and cars around, it can be quite stressful.) We drove back to Taipei to picked up my sister and then headed to Jioufen where gold was discovered. We had fun walking around the old streets, tasting various food, and buying some souvenirs to bring back to Germany. Too bad we had to hurry back to Taipei to meet some friends for a hot spring swim, otherwise I would have loved to sit down in one of tea restaurants and enjoy the great view of the area.
Posted by ally at 10:44 PM 1 comment:

We spent one night in Cha Yee Farm and visited Zen Ven Dam. There was a Magic show with four people in the audience - my mom, brother, Josh and I. It was a week day and no one else was there. Quite nice! And the best... Josh got to go on the stage and performed with the magician. 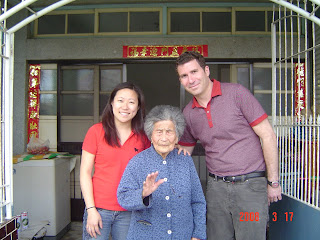 My 97 year old grand mom who was shy of camera. We tired so hard to get her in the picture and here she was...waving to say 'no'. After meeting grand mom, Josh wondered... will I ever shrink that much like grand mom when I get old. He is concerned that he will have to bend so much just to hug me. 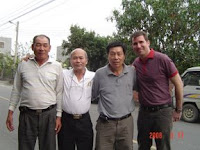 Photo time after catching up...most of them ran and went hiding. They refused to be famous on our blog. We only got two uncles, my mom's older brothers. 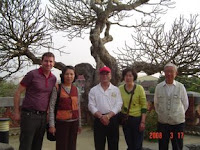 We went to see some old things in Tainan city. Mom's older sister and her husband joined us in 安平古堡(Anping Castle) which was called Orange and Zeelandia. Information for Anping Castle: http://en.wikipedia.org/wiki/Fort_Zeelandia_%28Taiwan%29 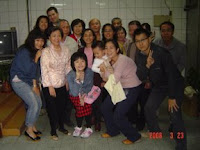 Relatives in Taipei... all the uncles, aunts, and some cousins. It's been a very long time since I last saw all of us together. It was great to see everyone.
Posted by ally at 5:01 PM 2 comments: