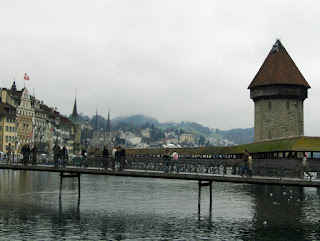 I saw a picture of Lucerne when I was flipping through a guide book. The picture looked so beautiful that I wanted to see the city in person. Josh was not convinced of visiting 'Lucerne' until his friends told him that the city is beautiful. Unfortunately, we had a not so good weather weekend. The sky was gray and started drizzling in the mid-afternoon. We started our Saturday by walking toward the oldest road covered bridge called Karpellbrüke. Had the weather been better, we would have taken a boat to see the city from the lake. Instead we walked 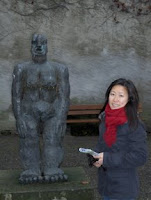 around the old town and stopped at a few restaurants/hotel for Glühwein (hot wine) and afternoon tea to stay warm. We also visited a lion monument that was next to the Glacier museum containng stones from the ice age and fossils that were more than 20 million old. We also came across a very ugly sculpture that I later found an interesting story... the sculpture was so ugly that the mayor at the time had to reveal the sculpture secretly in case there were protesters.

It was a Piano Festival week in Lucerne. There were concerts held in Kultur und Kongresszentrum Luzern (Culture and Convention Center). There were also free piano shows in the local bars and restaurants. So, we picked a restaurant which happened to be a vegetarian restaurant. We enjoyed the music and the candle light dinner very much although we are not vegetarians. 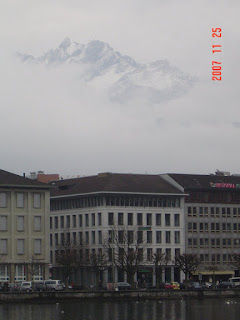 As we were leaving the next day, one little part of sky cleared up just enough for us to see the Alps. It's so beautiful. We took out our camera and snapped very quickly. We just afraid to miss it.

We had a quick stop at the Zürich. The Zürich train station was fulled of Christmas market booths and people. It's so feasted. Switzerland is such a beautiful country. We are definitely going back to visit again...and hopefully in a better weather conditions.
Posted by ally at 10:17 PM

Looks like a great city to visit. I love the picture with the alps just peeking through the clouds.

I was wondering are there any positions in the communications department? PR perhaps?
Just temporary positions? Living there seems like an endless vacation! :-)

P.S. Looking forward to seeing you very soon across the globe..

Do those those who want the CFPB neutered provide
an appreciation for this kind of predatory lending
payday loan in 1992, the endowment was $22 million as well as the
operating budget was somewhat under $21 million.