Loved driving the French countryside... especially on the Deutsch Auto Bahn with a convertible. Downside? It was about 45 F outside and cloudy. We were not going fast but...a "scooter" WAS. It had to be going at least 130 km/hr (about 80 miles/hr). A scooter not a motorcycle...no kidding.

So... it all started pretty good...we had a convertible, borrowed a GPS from a friend, and printed out maps just in case the GPS went kook. With all that, we still got lost... so lost that we had to call our friend Julia to reconfirm our Chateaux's name and address. (Here are two things you should know about driving in the French countryside at night - dark and no sign or tiny sign if you have eyes of owl.) I was so frustrated and my dear husband was trying lighten up the mood by saying, we might see wild boar since we were in the countryside. I said, why wild boar not deer?? Inquisitive wife as always...hehe~ I had no idea where Josh got the idea of seeing wild boar... Anyway, after one and an half hour of being lost and driving on the same road back and forth we finally found a 'road' --size of a bike path (with no sign) leading us to the right town. And a nice guy who jumped into his car and led us to the chateaux. No sign for the chateaux of course...we could have driven pass it without knowing it's there. Finally, we checked in about 10 pm. We were tired and hungry, so we decided to get some food. We were driving and just so happy that we found our chateaux. Suddenly, we turned happy to stunned... wild boar in the road...there was a big wild boar family - a mom, a dad, and countless babies... Josh was speechless...(I guessed he was just joking when he mentioned it earlier) and I just kept saying "pig...pig..wild boar...it's real...they were real...there were tiny pig babies. We probably interrupted their meal or dirt bathing time." Then, the mama and papa wild boar led all the babies crossing the road to hide in the dark. We were laughing so hard and could not stop laughing. That was the highlight of the day after a 5 hour drive which was supposed to be 3.5.

Came back from the dinner and walking to our room without our host was super creepy. It's a real old castle unlike the one we stayed last year (old but been modernized). This one was old too and was kept/decorated in the traditional way. We had to go through two very long and dark hallways to get to our room. And our room was huge and had portraits around the wall. Imaging all the eyes looking at us in the dimly lite huge room...I slept...ok. 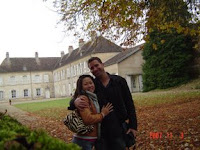 So that's the chateaux Autigny-la-Tour...not so creepy in the day! They also had a duck that would follow us around. I called that picture "Josh got a new friend!" Click on "our pictures to share" to see pictures inside of the chateaux and Josh's new friend.

Next night, we stayed at another tiny town, Coussey, since the last one was not available. It was a last minute type of road trip. This one had a very interesting long name - "La Demeuroe du Gardien du temps qui passe" and Chambres D'hotes. It was a cute, warm, and cozy old house. Side notes: The bathtub in the room looked romantic but not very practical. They served dinner also. We had dinner with six other adults and 3 children. It was not much of talking but lots of translations.

Since it's a countryside weekend, we stayed only in the tiny towns, Autigny-la-Tour and Coussey. We also visited the little towns of Neufchateaux and Toul that were not on the tourist book. We just found an old chateaux and decided to drive there and play it by ear after the first night. Well, it's a countryside road trip... how I could describe it. It was green, lots of cow, sheep, and wild boar (we saw a herd of wild boar after our late dinner heading back to our chateaux.) 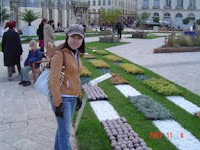 On the way home, we visited Nancy (pronounces Nuncy in French. We got corrected a few times.) Nancy was a very beautiful city. We only spent a few hours walking around the city. I would like to go back and visit again...but Josh said...there are so many places yet to visit. So...we'll see.
Posted by ally at 1:26 PM