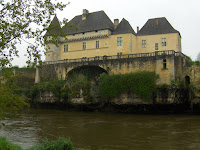 Driving is like a treat for us since we don't have a car in Germany, and of course a road trip is always fun. We often saw things that was just a little unusual for us, and sometimes, we got a good laugh out of it. Here are some pictures to tell.... an unknown beautiful castle (wasn't unexpected but this one is interesting). Josh pulled-over the car to take some pictures of the castle. A few seconds later, another car did exactly the same.

A foie gras farm sign on the side road; we thought we could get some for later when we want to remember our french road trip. We followed the sign which led us to a super tiny road (probably only for tractors) to a what you might call a chicken and geese farm house. To our disappointment, we didn't see any people but plenty of chickens and geese running around. Moreover, one roster was pretending to be a watch dog...kept rolling.
We drove by this bunch of animal...hmm??? what are they??? They looked too small to be cows but t 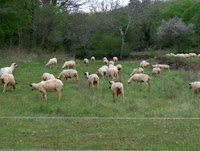 oo fat to be deers and no horns to be goats. It took us a few seconds to realize that they were "naked" sheep. They must have been shaved recently. It was quite funny to see sheep without their coats on.

Often time when Josh drove, I had one hand out the window with camera snapping away. I thought the image below turned out pretty nice. It captured the beauty of the road trip. 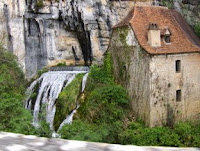 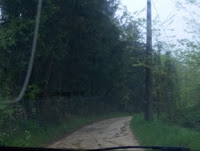 I'd say about 20% of the time, our GPS took us on roads like this. Not only is it a narrow dirt path, but also in the middle of woods. Oh, and our GPS was just about to run out of batteries. Can you image how stressful that was?? Getting lost ...only the naked sheep in sight and I don't speak baaahbaaah!!

Third day in Perigueux city center, at a forked intersection, and an ambulance rear ended our little Opel. Oh NO not us! You would think that an ambulance driver knows better. We got out of the car and took a look... a small dent in the back. Crap! I didn't think we would need the extra insurance when I purchased it...that was going through my mind. The ambulance pulled over in front of our little Opel...kind of odd I thought. Weren't they supposed to keep the crime scene untouched? Two French guys got out the ambulance and started talking and asking questions...&)(*UPI*&^)^%%(*^$%#$... Well, our French was limited to 'Bonjour', 'Merci', and 'Au revoir'. So we kept 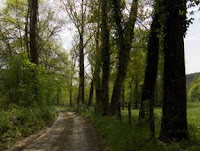 #$%)(*^%$@ )&$ back and forth until Josh called the rental car company to sort things out. No 911 or police report was required...weird, we thought. The two French guys filled out an accident report and said sorry and then they left. We were not hurt or anything besides both of us being shocked and I was shaking uncontrollably the entire time. We lost interest and appetite for dinner. We decided to cut the night early and headed back to the hotel in Beynac. Just after an hour from the ambulance accident on the way back, I felt the car run over something and heard 'shit'. My heart started racing again. Josh stopped the car and said that he clipped a little deer, who jumped right in front of our car from the woods. He didn't even have time to avoid it and I didn't even see it. Well...how is that for the French country road driving experience. First an 'ambulance' then a Bambi. I guess having a GPS is not enough for the road trip. We will need some kind of motion sensor to alert us that something is approaching us at a dangerous distance. I thought that it is a pretty good idea...
Posted by ally at 8:32 PM

Our guest on the podcast right now is Rogério Mezadri, Director of SAMOT Mexico, a 200-employee automotive machining firm in Guanajuato, Mexico. We offer dependable and effective broaching mens travel underware companies to all of our clients. We offer extensive variety|all kinds} select from|to select from}, depending on the various sizes and lengths you require.