Second day into our vacation, awoken by church bells, we got up and decided our itinerary - going south of Sarlat to Rocamadour and further south to Cahors by driving along one side of 2 rivers. 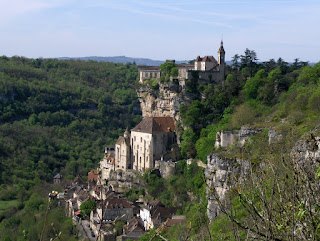 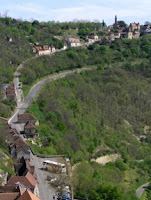 Seeing Rocamadour from distance, we were so taken aback by how all the old buildings sit on a rocky plateau above the Alzou Valley with a small road connected to the other side. The town was more than a spectacular view. According to the DK France guide book, Rocamadour became famous after the discovery of an anciant grave and sepulcher containing an undecayed body. Then, a serious of miracles came. It is still a holy shrine and a popular tourist spot. 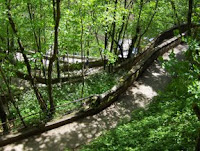 Followed the winding path going down, we entered an old church and came out to a big square where Josh stood in the picture. 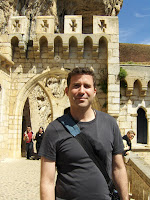 Then it was kind of up down, up down, then a lot of stairs to go down. We didn't walk around town much since there was so much more to see but we got the flavor. I hope you do too by click on 'our pictures to share' to see more. 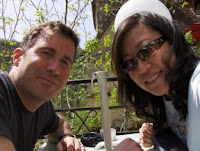 We had lunch at a cliff side restaurant. I had the meal of the day and Josh had foie gras salat which was fantastic. It was hard to go back with the long up hill path and stairs but we did it without taking the elevator. We figured that we would need all the walking after our meals anyway. 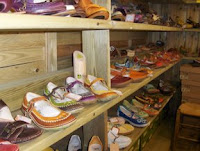 You probably wonder why I posted a picture of shoes. Did you notice how cute they are? We probably spent more time in this shoe store than in the old church. Josh got me a pair (the kind you just slip you feet in) when we were in Madrid. They were the most comfortable and cutest shoes. Since I could not have them all, I took pictures! Not a bad idea, right?

We started 2 river tour from a town called Figeac and drove through other towns called Espagnac-Ste-Eulalie, Grotte de Pech-Merle, and Cahors. When we arrived at the Grotte de Pech-Merle, it was just 10 minutes past 5. We missed the 25,000-year-old prehistoric site where has some ancient paintings on the walls. We only briefly stopped at the Cahors since we didn't want to drive in the dark country roads.

We had dinner back to Beynac at a river side restaurant. The food was good, at the same time we were about to be eaten alive by the mosquitoes. It's all about either to eat or to be eaten!
Posted by ally at 1:56 PM

OH MY GOD!!! I love the shoes! Were the blue ones you were wearing at the BBQ the shoes you bought at this store? I would have taken pictures of the shoes too :)