Day four, we got up early, packed and headed to the next home for two nights. On the way, the scenery changed from lime stone cliffs, luscious green, small rivers, windy roads to a less hilly landscape with fields after fields of crops. We also saw more industrialized small cities (Cognac region) instead of little farming villages (for example, Foie Gras). Since we were in the area where cognac is produced we decided to stop by the city Cognac for lunch and a nice tour in Châteaux Otard. Lunch was at a hotel restaurant that had pistachio green walls inside. We had some cognac for appertif, foie gras on toast and skewers of meat for the main course. They were delicious. 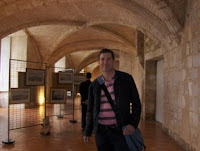 We joined the English tour in Châteaux Otard where the first French King was born. The tour showed us the processes of making cognac including distillation of the alcohol, flavors for blending, and aging for the quality (Very Sepcial, Very Special Old Pale, Napoleon, eXtra Old 55, XO Gold, and 1795 Extra) of cognac. The interesting thing about the aging was the black mold which grew a 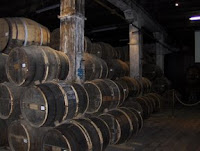 round the celler, fed by the alcohol from the oak barrels. Because of the aging process, we realized that not all cognacs taste like gasoline... once you get to the level of Napoleon, it tastes better. However to our taste and budget, the cost- benefits to cognac just didn't seem to be there. We are more wine and beer type of people. Still, it was a worthwhile visit.

In the next 2 hours, we drove to the marshes area and looked for our B&B. Unfortunately, the B&B address was NOT in the GPS. We were totally lost in the small villages. We stopped and went into a small shop for directions. Again, our French was very limited and so their English. At the end, the shop lady called the B&B, jumped into her car, and hand signed us to follow her. Such nice friendly country people. Our host family is from England. They decided to end their business and moved to France to have a different life style just a few years ago. Since they spoke perfect English, there was no problem for us getting a recommendation for a dinner place. We ended our forth day at a local restaurant with a nice meal. 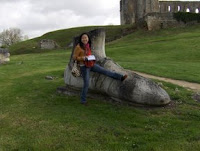 The next day, had a tip from our host and headed for some fun. Our first stop - Abbaye De Maillezais. We walked around the ruined and took some goofy pictures then headed to second stop - Damvix where we rented/shared a boat with another French family of 4. The tour guide paddled the boat in the canals for an hour. Althought the weather was unpredictable...

changed from sunny, cloudy, raining, to sunny, we still enjoyed the boat ride very much. The sounds of breeze and birds between the trees and the scene of narrow canals were just absolutely beautiful. No wonder the wet marshes area was also called Green Venice. Click Our Photo to Share to see more.

We droved to La Rochelle by the coast for a scenery change. La Rochelle is a pretty harbor town that also is a yachting center on France's Atlantic coast. We climbed up one 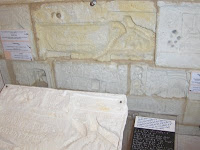 of the towers - Tour de la Lanterne which had its inner walls covered in graffiti by prisoners between the 17th to 19th centuries.

As always, we ended our day with a wonderful French dinner...oysters for starter, various roasted greens for salad, fish for the main course with a bottle of local white wine. Ah...what could be better than this. That's what life is all about! We definitely appreciate it for what we have.
Posted by ally at 12:21 AM

Nice site, nice and easy on the eyes and great content too.