I was awoke by the thunders and rain in the middle of the night. It didn't bother Josh at all. He could sleep through anything. So the next day, we woke up with the continuous rain and pretty chill weather. Since we didn't get to see the prehistoric cave yesterday, we decided to head to north of Sarlat toward Les Eyzies, Hauitefort, then turn to west toward Perigueux.

Our first stop was Grotte de Font de Gaume in Les Eyzies for the prehistoric paintings. Apparently I spent too much time to get ready in the morning because the only appointment we could get was 3pm. Who knew where we would be by the afternoon, so we headed to another one (the super famous one too), Lascaux II about 30 minutes away. We got our tickets for the French tour. Again we couldn't get in until late afternoon for the English tour. Just then we realized that only a limited number of people are allowed per day to see any caves. So we had a French guide tour. Although we couldn't understand anything he said, French was definitely easy on the ears. The original Lascaux was closed from a green disease on the stone and no longer open to the public. We saw the replica, that was painted with the same materials. It was absolutely different from seeing paintings in museums and interesting to learn how the cave was discovered by a young boy and his dog. A great experience after our third try to get into a cave.

Lunch in the same town and always good food (3 course for lunch... just as I am typing away for this part, my mouth is watering.) In the restaurant, we met three Brits who retired in the area closed by. I wonder why? Duh...just three days into our trip, we were already mesmerized by the sleepy villages, slow pace, winding roads, rich culture, food, and wine. We even thought about moving toSouthwest France! The British people gave us some tips (Cognac, marshes area by Niort, La Rochelle by Atlantic Ocean) which we followed later in our vacation. 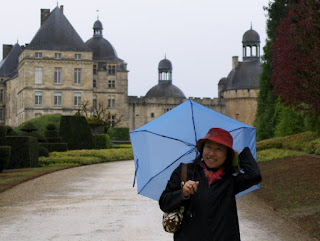 After lunch, we drove to Hautefort to see Chateau Hautefort. The chateau is very well maintained and has a nice big garden. No camera was allowed inside of the castle thought. I did get a little French cook book from the souvenir shop. Always thinking about my 'hausfrau' responsibilities at all times. 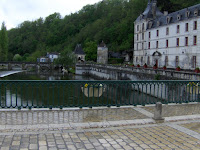 We stopped at the Bourdeille (cute small town surrounded by a creek) and Perigueux (semi big city). We were planning to have dinner in Perigueux but lost our appetite after a couple accidents. (See SW Fance VI - Driving in the French country road.) We were both too shocked to have anything in our stomaches. Good that we had a 3 course lunch... I am still thinking about it. Ha...
Posted by ally at 3:31 PM