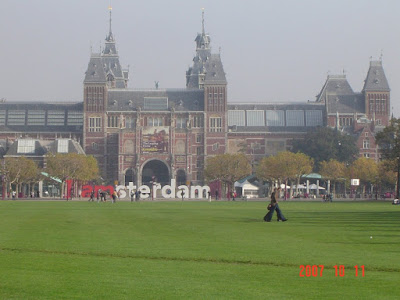 I love Holland. People speak at least 4 languages: Dutch, French, German, and English. For that reason, it's easy to understand why Dutch people's tolerance and acceptance are so high. Not only are they the friendliest people beside Irish, they are the nicest, most helpful, and liberal. If you know what I am talking about...same sex marriage, prostitution (red light district), and marijuana (coffee shop) are legal in Netherlands. We did some window shopping at the red light district and checked out the coffee shop the first night we arrived in Amsterdam. I was like WOW...that was so right in front of my face. 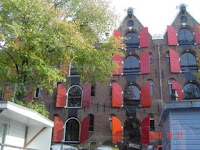 Amsterdam is also spoken to Venice of the North because of its canals. A boat ride with a glass of wine and a bar of chocolate was a great way to see Amsterdam city. Alone the canals, I saw old style compacted Dutch apartment, modern boat houses, tons of bicycle on the streets (We almost got ran over by bicycle several times. Bicycles have right of the way in Holland.) and a lot of bridges. Wondering around the city was also easy too... there were so ma 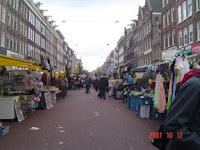 ny shopping areas and markets from most expensive and luxurious brands to cheapest things. Albert Cuypmarket was like a traditional Chinese market (expect for much bigger and longer than what I was used to) that sold everything and everything was cheap from anything you needed in the house to fresh sea food. And the flower market... beautiful tulips. 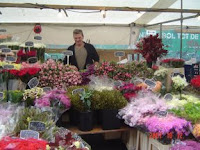 I got to tell you that Albert Cuymarket and the flower market were a housewife's heaven...I wished I live in Amsterdam. I felt in love with Amsterdam right there.

Whichever city we visited, we usually picked a couple of museums to see. Here in Amsterdam, I went to Van Gogh Museum. The more I got to know him...the more I thought what a depressing guy lived such a bitter life. However, that's probably why his paintings were so great. Too bad that he didn't live to see his own success. Then, I went to Heineken Experience to cheer myself up. 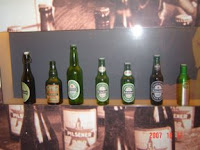 The entrance ticket included three bottles of Heineken beers and a gift. I didn't realize that Heineken was a Netherlands' beer. I learned more about the beer processes and Heineken history and culture. They even got rides for visitors. One of the rides was called something like - bottle experience. Basically, I got to experience what it was like to be a beer bottle! From been washed, filled up with beer, packed, shipped, and straight to the party animal's hands. It was FUN! 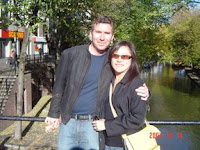 We also visited a couple of small towns Harrlem and Utrecht after Josh's conference. We visited the Frans Hals Museum in Harriem where we learned about the Harriem city and tulip high price market history over Frans' paintings. There was also Grote Markt, a quare where St. Bavokerk and Stadhuis (city hall) were at...and a farmers' market on Saturday.

There were so much to see with so little time. I only got to see a fraction of Amsterdam and Netherlands. I hope to visit the country again in the near future.
Posted by ally at 10:17 AM

OMG Ally,
I brought Mike into the computer room to look at your blog. We are so super envious of the lifestyle you and Josh have. We were wondering if you guys wanted to adopt us?