Flat, lots of olive trees, and unusual houses were the scene from the Bari airport to city center. It was not much too see and I started wondering what we were going to do here.

Next day, we took a super slow and old train (we are spoiled by the German fancy train system) to Alberobello 56 Km southeast of Bari. We were not sure what to expect or to see besides a little description from tourist information office. After a little walk later, we found the so called Trulli*. 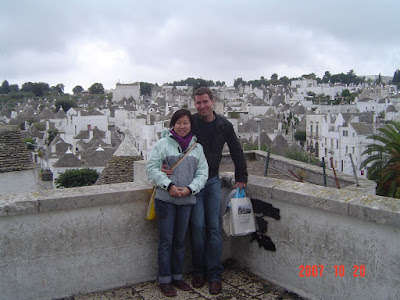 It was very interesting to see. When we walked around the trulli village, Josh kept wondering if these trullis would have leakage problems since they were built by piling up limestone. It didn't appear that any dirt or clay was used from the outside until we went into the gift shops... he saw that the inside of trulli was nicely constructed with no holes on the roof. It was too bad that the museum was closed. They had weird open hour (generally, people in the south close business between 1-3 in the afternoon) except for the gift shops... luckily... we got some unique souvenir for my roof collection.

*According to World Heritage, "the trulli, limestone dwellings found in the southern region of Puglia, are remarkable examples of drywall (mortarless) construction, a prehistoric building technique still in use in this region. The trulli are made of roughly worked limestone boulders collected from neighbouring fields. Characteristically, they feature pyramidal, domed or conical roofs built up of corbelled limestone slabs." 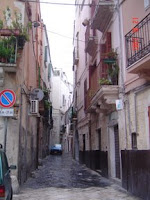 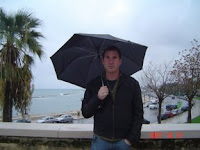 We spent another day exploring Bari's old town which was a fish market way back when. Streets were narrow; buildings were crowded; people's laundry stuck outside of their balconies (I happened to pick a street without the laundry for the photo shoot...it's really everywhere.) We also found anther roof tile that was originally from the Cattedrale San Sabino and the price was ONLY a thousand Euro. We both decided to pass. It was a raining day and windier by the coast. Our umbrella was totally destroyed at the end of our trip. We ended up spending our time in various neighborhood coffee/bar to avoid the bad weather. Fun and interesting, but not the sun filled Italy we had hoped for!
Posted by ally at 6:54 PM

Meet the situations wisely and strategically
to maintain problems miles away and also to welcome pleasure and happiness for your life nie.im there are two
types of land resources available, we are going to discuss
in greater detail: standard draw down the loan to invest in the land and buildings.