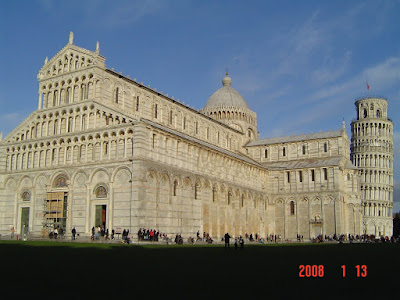 We had pizza in a piazza in Pisa. Not only was it fun to say, it was great actually having a chance to do it. We went to see the Pisa leaning tower after we arrived. It was raining and cold. Since it was during the off season, we had no problem to get tickets to go inside the tower. (Because of the tower's structure, the tower was limited to certain number of people each day. It was recommended to purchase tickets online two weeks early.) Walking inside the tower was more difficult than I thought... the stairs were narrow and it leans so much to one side that I had to walk against the wall. It was very beautiful even on a raining day. We could see the green fields surrounding Pisa, and the mountains beyond the field.

Next day, we decided to check out Luca... however the train was on strike. Bummer! But it was okay...because we could take bus... so we were told. It took us a while to fin 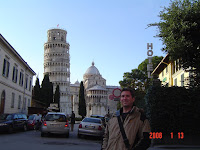 d the right bus stop and we waited for an hour....and the bus never came. Super disappointed. The public transportation is just not that reliable in Italy. Anyway, we spent the second day wandering Piazza die Miracoli and took more pictures. Although, we were disappointed of not going to Luca, the food in Pisa were surprising good. We were impressed that we could eat cheese with onion jam.

I am so looking forward to seeing more of Tuscany. Next time, I am going to rent a car for sure since we have a GPS now. (Yes...we have a GPS but we don't drive and don't have a car in Germany.)
Posted by ally at 4:07 PM

I am happy to find useful information from your website, I have some information to share, you can click the link below then, thank you very much.
loa jbl charge 2+, loa jbl flip 3, loa jbl xtreme , loa jbl pulse 2, cho thue xe tai gia re, van chuyen hang gia re