I have been bugging Josh that I wanted to see Budapest since I moved here. Finally, Hungary, Slovakia, and Poland joined the Schengen Visa (Broader control agreement between EU countries) around December 2007 (the airport opened up for the Schengen Visa holders in April 2008). Ever since, I have been planning a trip to the east around Josh's birthday. After telling Beth about my plan, she got excited and talked her husband into joining us because her birthday is just two days after Josh's. (Jun, Beth's husband, is Josh's coworker in Germany. That's how I met Beth. They are from the Philippines.) Brilliant idea - birthday trip for Josh and Beth!

The day finally came -- November 1st. We arrived around noon, got a taxi, and headed to our hotel. After a while, the taxi started going uphill toward some castle looking structure. The four of us were like... are you thinking what I am thinking? "Are we staying there??" My mind was going back to my memory of when I made the reservation for the hotel...I knew the hotel was called the Castle Hotel and in a good location. What I didn't know was... it's a superb location -- castle district and a UNESCO World Heritage site. If we could, we probably would have screamed in the taxi. Our smiles were so big and we couldn't believe what a great deal I found! Later, we checked in and found that our room was a specious loft without a kitchen. Instantly, Josh and I said "OMG...it's so cool 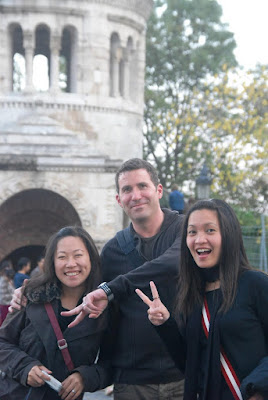 After lunched at a very busy yet interesting local cafe/restaurant, we started our first day sight seeing at the castle district since it's close to our hotel. We were instantly drawn by the beauty of the Mátyás (or Matthias) Church. We all took out our cameras and started snapping away and taking pictures

of each other. Actually, Jun took most of the pictures. Can you tell how excited we were from the picture on the left?

And the pictures on the left were also taken by Jun when we were not aware. 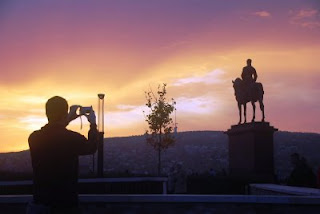 Colors of the clouds were changing by the second. Josh was trying to snap a picture of the stature while Jun was taking a picture of him taking pictures. It's all about catching the moment...we realized that's what Jun likes to do. We enjoyed the sunset however our excitement had gotten us tired. We went back to the hotel and took a little nap before our evening birthday celebration for Josh.

The birthday celebration contained two parts - a symphony concert at a palace and a late dinner on a boat in the Danube river . The concert was...hm~ let's say... just okay until the conductor came out for the curtain call. On the second curtain call, the conductor started conducting and asking for the audience's applause for the encore. He was tricky with the tempos and conducting in a very exaggerated manner with the audience. It was totally unexpected and fun. We were all very happy and laughing so hard for how the concert ended. 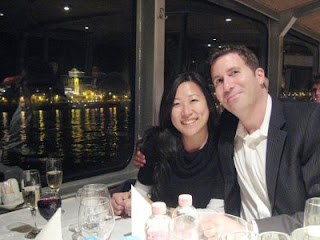 The food on the dinner cruise was pretty good. They also had many varieties of dessert. Josh finished his dinner so quick that he started attacking the dessert section before we finished our food. It got me so nervous because I had planed a surprised birthday cake for Josh and Beth. Before I could tell the waiter to bring out the cake, Josh already finish his first round dessert and going for the second. I tried to tell him to slow down and 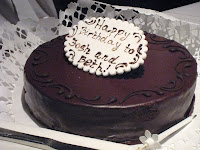 only got "why are you trying to stop me on my birthday?" Finally, I had to get up and talk to the waiter and pretend I was asking for directions to lady's room to get the cake delivered to our table. Surprise!!! Josh was surprised and so was Beth. Josh was very happy now since not only he could he have the second plate of dessert but also the cake!! 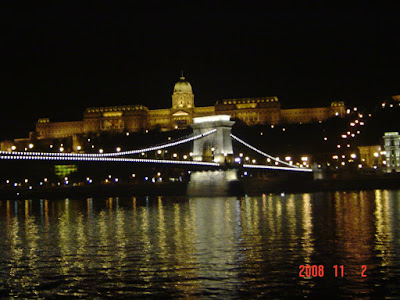 Light illuminates from buildings, bridges, boats, and streets created such a beautiful view. The picture on the right was taking on the deck of the cruise after we were super full.

What a romantic setting for a birthday celebration. You look like celebrities on the cruise and the chocolate birthday cake looks almost as good as Ally's creations. May you always be as happy!