Sicily I - Palermo and Monreale Abbey

When I thought about Sicily, I thought of the mafia. Especially, when we started walking towards to our B&B, we got super paranoid and scared. The street was dark (we arrived 9pm), stores were closed, doors and walls were covered with graffiti, and only questionable people wondered around, and a few junk cars and some mopeds drove by. The only thought we had was "MAFIA! MAFIA!! MAFIA!!!" and we might be "ROBBED". About half way down the street, Josh decided to turn around and get a taxi. Better be safe than sorry!! Negotiation always comes first before you jump into a taxi in Italy. 15 euro for less than 5 minute taxi ride...those taxi drivers were tough negotiators--- What I can say! It at least prevented us from being lost and robbed and the hassle of dragging our suitcases.

Around the corner of B&B, we found ourselves in the busiest street in Palermo at such a late hour. There were many bars, pizzerias, and food stands. Tables and chairs were on both side of the street. People were relaxing and chatting away with their friends. It was a great place with a wonderful atmosphere. We found a table, got a couple beers, and started people watching. Besides the regular looking people ranging from teenagers to some older adults, there were definitely some mafia looking guys covered with tattoos and huge gold accessories around their necks and wrists. We also noticed some tourists walking by... not sitting with the locals... only Josh and me. It was such a fun place that we went back the next two nights after our dinners. It reminded me so much of the Taiwanese night market less the shopping.

There is so much to see in Sicily... even just around Palermo. From my research, we only picked a couple of places that were easy to get to and also interesting to see. So... after our first night of excitement and a good rest, we headed to Monreale Abbey. It's about a 30 minute bus (#389) ride from the Palazzo Reale to Monreale. Again, waiting for a bus is always longer than riding it. It's Italy... they don't usually run on schedule. 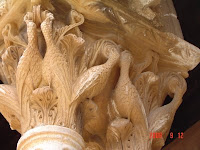 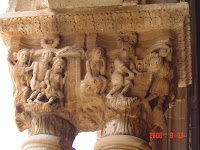 The abbey shows a varieties of cultures. It's a cathedral with Arabic structures and walls covered by mosaics with Norman art style. Even some parts of the floor we directly walked on are covered with mosaics. Surprisingly, they weren't covered with clear plastic floor mats to protect them. The abbey is 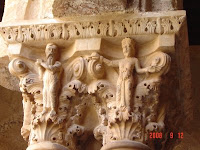 gorgeous and we were fascinated by the art, court yard and the view from the roof top. There are 228 columns (in pair except the ones in the corner) in the court yard and each one of them has a distinct design from the other. Here are some close ups. 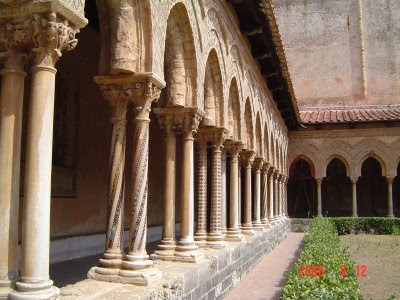 After visiting the abbey, we walked around and stopped by some souvenir stores. We did not find any roof tiles this time but we got a ceiling lamp (you can see the picture from the picture slide show.) I can't wait to have it installed above the dinning table.