It's almost two months since our last trip to Copenhagen. We were very excited because it's two new countries for us (21st and 22nd countries visited for me and 40 something for Josh). 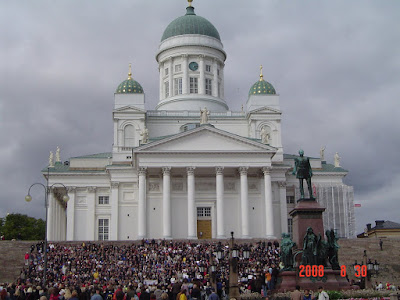 It was COLD (about 40s F) considering it's still August. Helsinki is quite modern with some old buildings here and there not centralized in one area. The Helsinki church is the most impressive building which dominated the city skyline. There were a lot of people gathering on the steps holding posters and yelling some slogans we had no idea what it was. Anyway, we cursed around the city, had lunch at the market square by harbor, and took ferry to Suomenlinna Island Fortress. On the ferry boat besides the tourists there were tons of well dressed and handsome people going to a wedding on the island church. The island is quiet, peaceful, 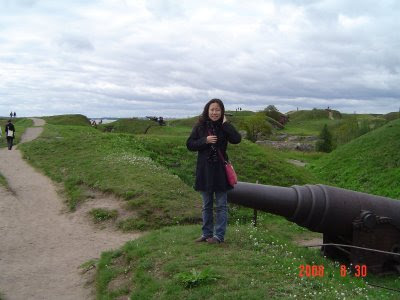 and beautiful. There were museum, coffee shops, restaurants, and residence houses. We strolled around and took a break in a junk boat yard/coffee shop. At night, we went to see Cirque Plume (like a cirque du soleil show). The show was mostly in Finnish and French. Although we had a language barrer, we enjoyed the show very much. It was great and hilarious.

Next day, we took a very large ferry boat across the Baltic sea to Tallinn Estonia. Tallinn is such a cute, clean, and touristy old town. We felt in love with the city right away. We had some traditional food, in which one of the particular interesting dishes was the stew pork with the fresh baked bread on top (like a chicken pot pie). 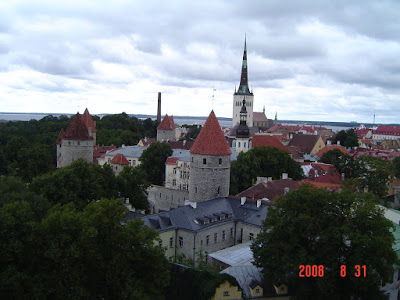 When the waiter served it to me, he took out a knife unexpectedly and raised it high. He poked the knife into the bread and sawed a holed in the bread like killing a pig in the bowl. He withdrew the knife with the piece of bread he cut out and poked the knife again to the edge of bowl. The whole time, my eyes were wide open and scared. Not only because of the knife but also because the waiter looked like a formal KGB agent... cold, unfriendly, and ready to kill. So...that was my first impression of eastern European for you.

Isn't that a cute hat? And no, we didn't get it. I wasn't sure if I dare to wear it out daily. Tallinn surprisingly is a great city to shop. We got some special old style drinking glasses. You know what it was not my idea...Josh loves them. 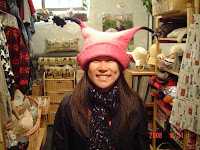 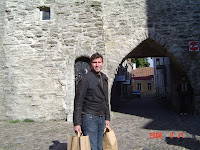 Tallinn is also known for a good party town because of its location and price advantage comparing with Scandinavian countries. Although we wanted to party, we found ourselves too tired to party...we are getting old. Anyway, we had a great time and loved the city.